My dear friend Kati grows a lot of different vegetables in her home garden. Every year during September/October period she brings me freshly harvested Jerusalem artichokes. This time she brought me also a celeriac, a crop she started growing this year. So, I decided to make a soup using these nutty root veggies. Here is my take on a French classic: Velouté de céleri boule et topinambour.

As celeriac requires a longer cooking time than Jerusalem artichokes, start by peeling the celeriac first. Rinse celeriac well before coating it with aromatics. You can start preparing the artichokes when the celeriac is cooked through.
Coat the celeriac with thyme, bay leaves, black peppers, salt, garlic gloves, evoo and butter. Place in an oven dish, cover with a tin foil and roast until in celeriac feels soft and tender (+180 degrees Celsius convection oven). Then remove the tin foil and continue roasting until the surface of the celeriac is caramelized; pasting over with the cooking liquids couple of times. Set aside.
Now, wash and trim the Jerusalem artichokes under cold and running water. Then boil them in lightly salted water until soft. No need to peel the artichokes. If you are bothered, you can remove the skin after boiling these lovelies. Peel is fibre, thus healthy for your gut. 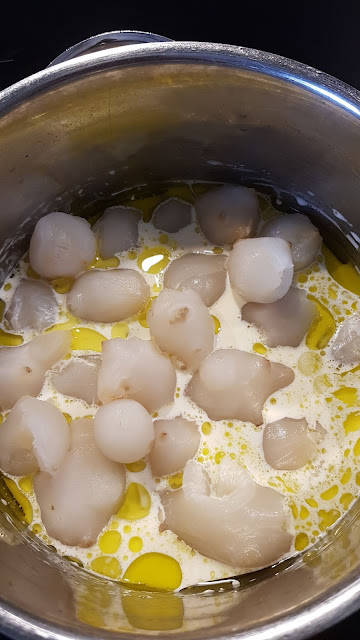 Prepare a light roux with butter or extra virgin olive oil, flour, and cream. Add in the Jerusalem artichokes and celeriac and use a stick blender to form a velvety/silky soup. Season with salt and black pepper and bring to boil.