Posted by Helena Saxberg on December 09, 2021
Arguably Italy has the most talented chefs and home cooks in the world. I am a home cook and I learned my basic cookery skills mostly from Italian mothers and chefs. This dish is my take on Benito Morelli's famous summertime dish "Paccheri con gamberoni, melanzane e pecorino". I added in the dish chopped baby asparagus and a green chili as I always want to tamper with recipes. Did not have paccheri pasta, so I used penne rigate instead.
Benito was the legendary chef/owner of the famous restaurant Benito al Bosco in Velletri (Lazio), which I believe is run by his children since a decade now. It is thanks to chefs like Benito, that tourists and Romans head to Castelli Romani to sample light summertime dishes and relax in a fresher climate when it is too hot to stay in Rome. My favourite places in Castelli Romani are Ariccia, Nemi, Frascati, Grottaferrata, Castel Gandolfo and Velletri. All great places to discover local/seasonal dishes. 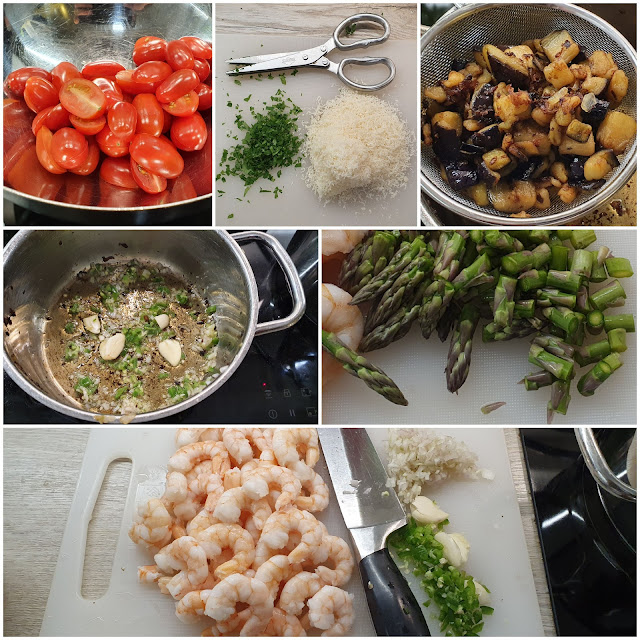 Prepare the vegetables and the prawns. Sweat the eggplants (cut in cubes) with salt for about 20 minutes, rinse well and then squeeze with your hands and/or pat dry with a kitchen towel.

Start cooking the pasta for about 11-13 minutes. If you are slow or your pasta takes less time to cook, put the pasta boiling when you have cooked the sauce number one. The sauce should be ready before the pasta rather than the other way around.

Regarding the sauce, we prepare two of them in separate pans.

Pour 3 tablespoons of extra virgin olive oil into the pot and drop in the garlic, the chilies, the prawns, baby asparagus, and cook them for 2 minutes in high heat. Now add in the white wine and mix well. Let the alcohol evaporate. Next add in chopped fresh cherry tomatoes and leave them to cook for about 4 minutes. Sprinkle over some finely chopped parsley and season with salt and black pepper. Cover, and let the sauce cool down.

Pour into a large a pan 4 tablespoons of extra virgin olive oil. Stir-fry the cubed eggplants and scallions until they have browned for about 7 minutes. You can do this whilst you are cooking the sauce number one if you are good at multitasking.

So by now 7 minutes has passed since you started cooking the pasta. Take now a half a cupful of pasta cooking water a part. Strain the pasta and mix with the two sauces together. Add some pasta cooking water, if sauce looks too dry. Remove from the heat. Add some grated pecorino/parmesan and sprinkle on top some finely chopped parsley. Serve immediately.