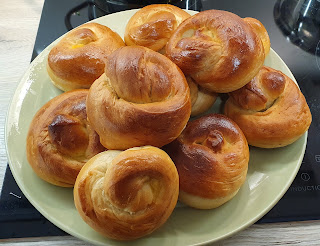 Uncle Ron is the most talented home baker that I know. If he should ever leave finance and his work with Finnish start-ups, he should start a corner shop selling pizza and bread! I would invest in that! He makes addictive Neapolitan style pizza and the Ashkenazi style challah rolls, which is a type of brioche, where extra virgin olive oil is used instead of butter. Yesterday, Ron came over for dinner and card games (Bohnanza by Uwe Rosenberg), and he delighted us with a bag full of challah, which obviously disappeared fast.  Today, when I went to the kitchen, there was just an empty 6 litre IKEA ISTAD bag left, so I had to have Axa's roasted granola for breakfast instead.

Ron's take on (no honey in this recipe) challah rolls – adapted from Jamie Geller’s challah for bread machine recipe.