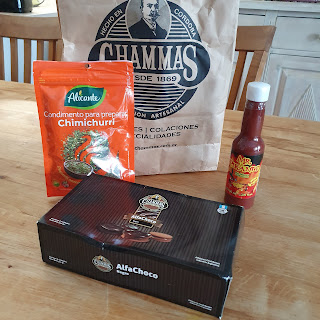 I marinated eight pieces of topside lamb cuts in Alicante chimichurri dry mix. As per instructions on the packet, I added into the dry mix extra virgin olive oil and white wine vinegar (1 part Alicante chimichurri dry mix, 3 evoo & 3 vinegar). I also added freshly crushed peppercorns and one finely grated shallot into the mix. I flash fried the lamb on the pan first, and then finished cooking it in the oven. I prepared roasted potatoes as per Alicante's recipe (Receta de carne al horno con papas Alicante).

Our splendid Finnish-Argentinean neighbours brought us the chimichurri dry mix, among other foodstuffs (such as salsa roja and AlfaChokos). The latter were handcrafted in a Cordobean pastry shop called the  Cordobean, est. 1869.  Our neighbours and their beautiful daughters hadn't seen their abuelos since Summer 2019! Thanks to the covid restrictions ramping down, they had a chance to travel to Argentina!

For me trying out foreign foods is like taking a virtual food journey to countries I have never been to. Argentina is the eighth largest country in the world with a population of over 45 million. Over 60 percent of Argentinians are of Italian ancestry and thus the culture is strongly tied to Italy in regard to cuisine and tradition. Initially, the land was conquered by Spaniards, but from 1857 to 1940 immigrants, predominately from Southern Italy, arrived in Argentina to seek new livings away from war-torn Europe. During and after the Argentine Great Depression (1998–2002), many Argentineans of Italian descent moved back to their ancestral country. This is why in Italy there are numerous Argentinean restaurants. When I lived in Rome, I experienced authentic Argentinean foods and wine ex situ. One restaurant worth mentioning is the Ristorante Argentino Baires. If you’re travelling to Rome, you could pay a visit there.

My knowledge about Latin American countries come from scholarly sources, work, colleagues, media and Argentine friends. I have studied about the Geopolitics of Latin America, and written an a research paper on the  European Integration as a Model for Latin America? In my term paper, I answered to questions like:

Hopefully one day I will be able to travel to Argentina, and maybe visit other LA countries as well.